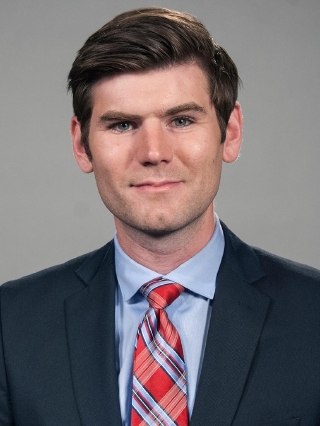 Dan McCarthy joined KATU’s reporting team in June of 2019. This is Dan’s second stint in Oregon, and second time working in a city named Portland!

Dan previously spent two years at WGME in Portland, Maine as a weekend anchor and reporter. He says the Portlands are similar in their passion for craft brews and flannel shirts, but different in their definitions of a snowstorm.

In Maine, Dan often covered crime and breaking news, such as the manhunt for the murder suspect in Sheriff’s Corporal Eugene Cole’s tragic death. He also was in Minneapolis for Sinclair’s live coverage of Super Bowl 52.

Before his time on the East Coast, he spent two years as the evening anchor for KTVZ in Bend, Oregon. He helped lead coverage on the shooting at Umpqua Community College in 2015, as well as the militia occupation of the Malheur National Wildlife Refuge the following year.

It was during his time in Central Oregon that he met his spectacular wife, an Oregon City gal who has kept his heart locked on the area ever since. The pair live in Vancouver, Washington with their beloved Yellow Lab, Romo!

Dan is excited to be back in the Pacific Northwest as a storyteller! Please shoot him an email at djmccarthy@katu.com , or find him on social media as @DanMcKATU. Say hello and share a story!